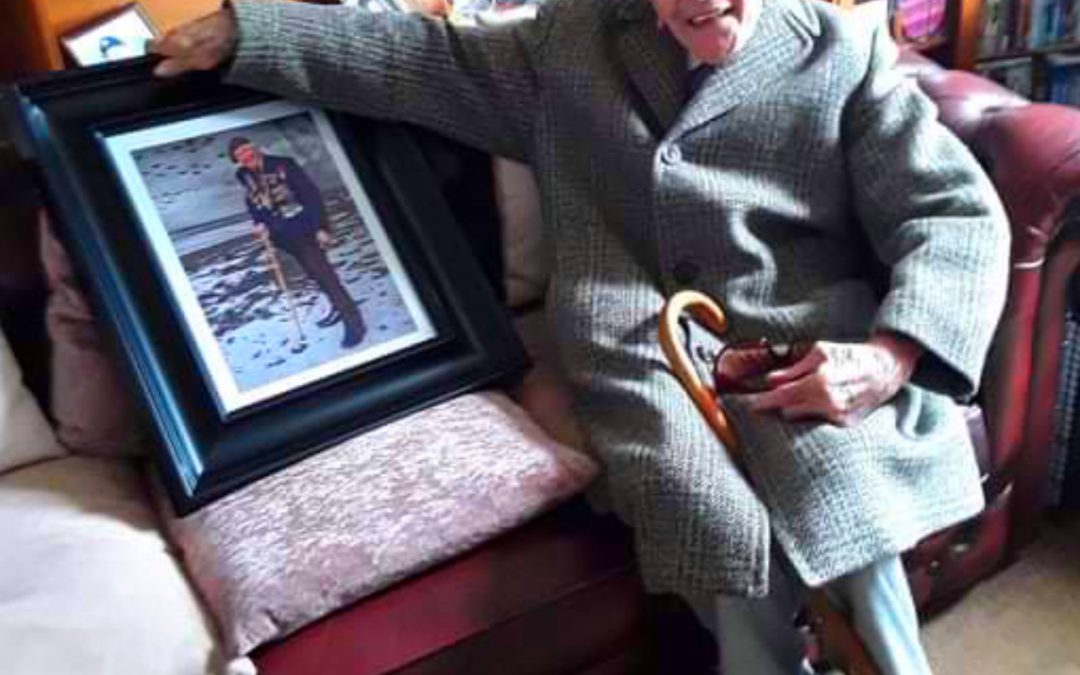 I first saw Harry Billinge MBE LdH 2 years ago on breakfast TV talking about the D Day Normandy landing in 1944.

Watching this powerful interview I was moved to tears with how humble Harry said ‘don’t thank me, and don’t say I’m a hero. I was lucky, I’m here, all the heroes are dead, and I’ll never forget them for as long as I live’ – link below.

I created a piece of artwork on my phone later that day which I put out on social media and it got a great response.

I decided to try to get the picture to him requesting people to share it on social media in the hope he would get to see it. I got as far as finding out that Harry lived in Cornwall but kept hitting brick walls.

During the lockdown, the landlord of The Nags Head (Manchester City centre) contacted me to ask if he could put the picture up in his pub which I was really pleased about as I thought it a great tribute to such a hero. Harry’s picture now stands tall (5 foot picture) at the top of the stairs in the Nags Head for all to see.

Only a few weeks back I was reading through a Nags Head post on Facebook and noticed a comment from someone who mentioned that Harry had seen a photo of his picture. I immediately messaged and enquired if they had any contact details for Harry and they put me in contact with Margot, Harry’s daughter.

Speaking with Margot over the past few weeks I found out it was going to be Harry’s 96th Birthday. Margot is a lovely lady and we decided that rather than just give Harry the picture, we was going to save it for his birthday and give it to him as a surprise.

Today was the day before his birthday and Margot received the picture which I sent back with her friend who was visiting Manchester. Although it is his Birthday tomorrow they are celebrating today as Harry still collects donations on Wednesdays for an educational centre at the Normandy Memorial for future generations

I was privileged enough for Margot to video call me to meet Harry and to watch while he opened his picture – which he loved. He is such an amazing humble man and so inspiring how he has dedicated his life keeping the memory of his fallen comrades alive. We spent 25 minutes talking which I will never forget.

I feel very proud that after 2 years I have finally got the picture I created to the real life hero that is Harry Billinge MBE LdH. In the process, the picture has been seen by thousands and will be seen by thousands more in Manchesters very own Nags Head. On top of all that I have made a great friend in Margot, which without her, this wouldn’t of been possible.

To quote Harry.. ‘The sun shines on the righteous’