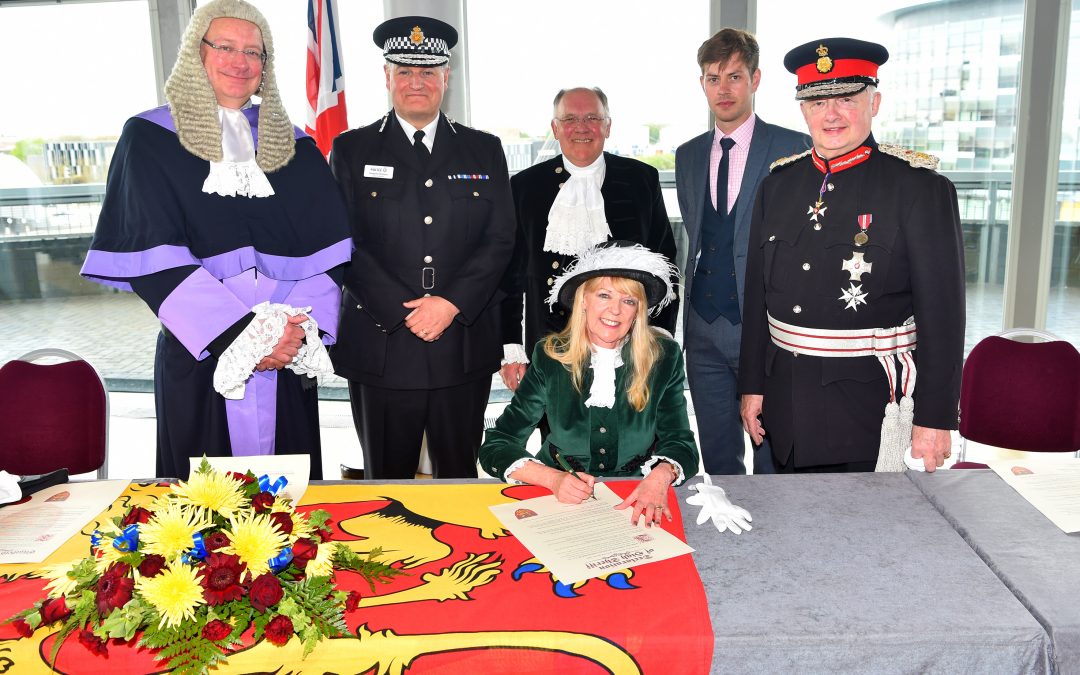 I first came across Lorraine Christine Worsley-Carter MBE DL back in 2020 after seeing she had tweeted a nice comment on Twitter regarding my artwork at Oxford Road train station.

After a quick search & finding out a bit about her background I dropped Lorraine a private message asking if she could advise me on getting my story out there promoting my art & art therapy.

After back & fourths messaging over the next year Lorraine wrote a great article on me https://quayslife.com/people/loveartpix-a-poster-boy-for-art-therapy/

Early this year when I had an art unveiling at Victoria station I asked if Lorraine would come down as she has been very supportive of my journey since we started speaking. Lorraine came down with a few other private guests which included the then High Sheriff Diane Mary Hawkins – see link http://loveartpix.co.uk/iconic-manchester-unveiling/

It was a couple of weeks later that Lorraine gave me a call to tell me that she had been selected to be the next High Sheriff of Manchester which I thought was amazing news. I was really blown away when she asked would I like to attend her Declaration – to which I gladly accepted the invite.

Abit of Information on the office of High Sheriff:

The office of High Sheriff is the oldest secular title in British history & one of the most ancient in the world. It dates back over 1,300 years to Saxon times.

The role of the High Sheriff was mentioned in no less than 27 of the 63 clauses of the Magna Carta.

Duties of the High Sheriff today include attendance at Royal visits in the county & support for Her Majesty’s High Court Judges when on circuit. Supporting the Crown & the judiciary remains a central element of the role. They give active support & encouragement to the police & to the emergency services, to the probation & prison services, & to other agencies involved with crime prevention, particularly among young people.

High sheriffs play an increasingly active role in promoting a wide range of voluntary work within their communities. As the Office of High Sheriff is independent and non-political, they are therefore very well placed to bring together a wide range of people from within the community they serve. High Sheriffs receive no remuneration.

The Lowery Theatre, The Quays, Salford

It was such a privilege to be invited to witness the ceremony & be part of an historic event which dates back 1300 years. The guests included The Under Sheriff of the County Palatine of Lancaster, The officiating Queens Commissioners, The Duchy of Lancaster Representative, The Retiring High Sheriff, The Lord Lieutenant of Greater Manchester, His Honour Judge John Potter, The Officiating Magistrate, The Chaplains to the High Sheriff.

The ceremony was great & a real honour to be around so many prestigious people who have & continue to contribute so much to society. This is a day I will never forget.

High Sheriffs represent the Sovereign in their counties in upholding all matters relating to the Judiciary and maintaining law and order. Their responsibilities conferred by the Crown through warrant from the Privy Council can be summarised as: Attending Royal visits to the county.

I know Lorraine has big plans for her 12 month term as The High Sheriff of Manchester. Hopefully a couple of things we have spoke about together with regards to art therapy will come into fruition.

I would just like to say another huge congratulations to Lorraine Worsley- Carter MBE DL on being chosen as the High Sheriff of Manchester.